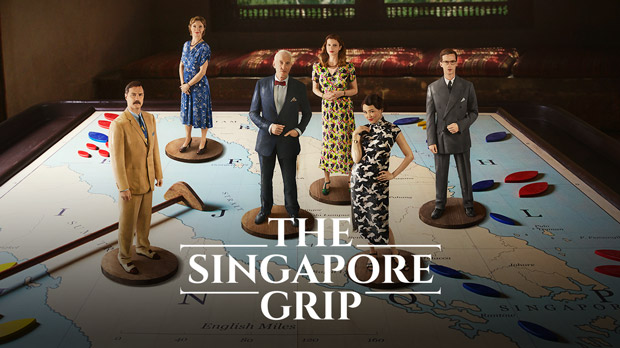 ITV’s Sunday-night slot is typically a haven of softly-softly cosiness, so the discussion, debate and criticism surrounding its adaptation of JG Farrell’s 1978 novel The Singapore Grip may have come as a surprise. From the moment the trailer appeared, the drama was mired in controversy. The British and south-east Asian advocacy organisation Beats issued a damning statement criticising the series’ “harmful non-representation” of Asian characters and its “breezy and inconsequential” approach to a traumatic period in country’s history.

The story takes place in the early 1940s, when Singapore is under colonial rule and the British are about to surrender to the Japanese army. It opens with a big, explosive combat scene, and the promise of a night-time escape for Matthew (Luke Treadaway), a softly-spoken Briton set up to be our hero, with space reserved for his girl, whoever his girl may be. The action then rewinds six months to tease us with the possibilities, and homes in on the lavish lifestyle of the Blackett family, who co-run a rubber business and live in a brightly coloured haze of opulence that isn’t so much a mockery of it as a glossy perfume ad.

One shot of the daughter Joan lounging by the pool almost calls for a breathy voiceover. “Colonialism, pour elle?” It’s all tea dresses, fancy cars and vaguely Downton-esque corporate and romantic subterfuge.

Charles Dance is Mr Webb, the business partner of David Morrissey’s Walter Blackett. When the company undergoes a surprise restructuring, it is Matthew, not Walter’s feckless son Monty, who is likely to be in line for a promotion. Monty is a disappointing potential heir: drunk, idle and vulgar, the kind of silly young man who brings a yogi to the house for the sheer amusing novelty of it. “How’s he going to run an enormous company?” wonders Walter, which goes to show how standards have been lowered. These days, he’d be considered more than qualified to run a country.

Even though she’s a woman, Joan is far less disappointing to Walter, who treats her as an in-house honey trap, which is as gruesome as it sounds. While Jane Horrocks gamely harrumphs around the mansion as the matriarch Sylvia Blackett, concerned about the impact of their daughter’s floozy-ish antics, Walter makes the most of her charms, seeking information to benefit the business from more than one source.

Anyone wondering where all the Singaporeans are in a drama set in Singapore, well, don’t worry. They’re in the background somewhere, if you really look hard. Events for the Webbs and Blacketts are complicated by the arrival of the mysterious (sigh) Vera Chiang, who wafts on to the screen mysteriously, and hints at mysteries, though gets suspiciously little screen time in this opening episode. Joan meets Vera in Shanghai, where Vera is being punched in the face by a Japanese officer. Later, in Singapore, Vera is suspected of being a communist, who is under threat of deportation until Webb takes her in.

Farrell’s novel is an anti-empire satire, defenders of the series have pointed out; the wealthy white families at its centre are clearly awful, and they are far from being sympathetic characters. There is some of that left over here. Joan and Walter marvel patronisingly at Vera’s good English, which is as present-day as it is early 1940s. Sylvia has some decent lines: “He’s not dead, is he? And the weather! What else could go wrong?” And I did enjoy Joan’s willingness to go as far as her father deems necessary, without much in the way of a prompt. “What does it matter what he’s like? Of course I’ll marry him,” she purrs.

But the fact that the story is supposed to be satire makes it all the more strange that it lacks any bite. It’s all very Sunday evening. Perhaps everyone grows more villainous as the action progresses. Perhaps the threshold for my expectations of what dastardly things people in power will do to brazenly hang on to it has dropped. But almost everything, even the military scenes, are awash in an oddly pitched humour that feels as if it has been cast between two poles, neither vicious nor silly enough to make sense of telling yet another colonial story from an almost entirely white perspective.

Some viewers will have read the book; others, like me, will not have, though I cannot imagine it will do much to impress either camp. This is a middling drama that fails to deliver what it promises, and it is all rather frothy. I understand that it is a story written more than 40 years ago, looking back a similar number of years, by an author who made it very clear where his sympathies were. But surely there was a classier way of bringing it to our screens in 2020?