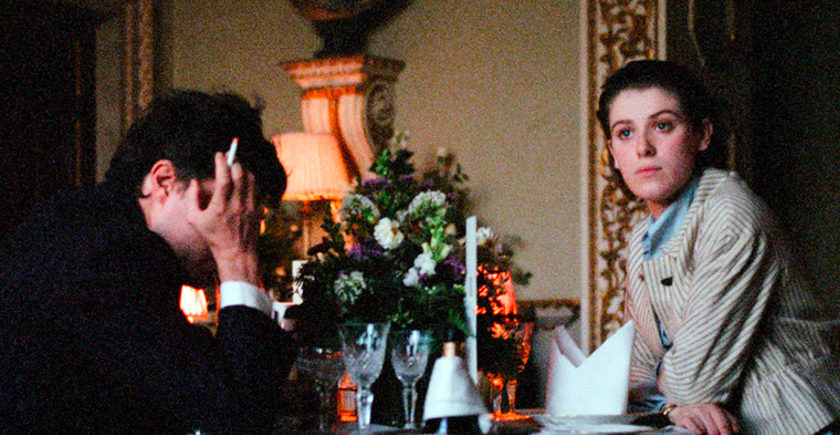 Review: Early in “The Souvenir,” over drinks and and a current of passive-aggressive flirting, two soon-to-be lovers rehash the old life-versus-art debate. One, a filmmaker, is anxiously preoccupied with honoring reality as faithfully as possible. The other, an observer, all but rolls his eyes: “We don’t want to see life played out as it is, we want to see it as it is experienced in this soft machine.”

Joanna Hogg takes a little of both positions in her rich, exquisitely reflective fourth feature — a work of memoir shattered and reassembled into a universally moving, truthful fiction. Achingly well-observed in its study of a young artist inspired, derailed and finally strengthened by a toxic relationship, it is at once the coming-of-age story of many women and a specific creative manifesto for one of modern British cinema’s most singular writer-directors. A satisfying rebound from the precious insularity of 2014’s “Exhibition,” Hogg’s most ambitious work to date also looks to be her most broadly exposed, with Martin Scorsese lending his clout as executive producer, Tilda Swinton bringing marquee appeal to a pitch-perfect ensemble, and A24 having already snapped up U.S. distribution rights. It’s a good time to get on board: “The Souvenir Part II,” with Robert Pattinson joining the project, is already in the works.

Since arriving fully formed on the scene with her eerily immaculate debut “Unrelated” in 2007, Hogg has accrued major auteur status in her homeland while remaining something of an arthouse secret abroad. For newcomers to her work, “The Souvenir” provides an ideal entry point: Lucidly shot by David Raedeker, it’s poised halfway between the hushed domestic naturalism of her first two features and the more experimental provocations of “Exhibition.” Still, there’s a sinuous, elastic tone here that’s excitingly new to her oeuvre, as brittle social satire gives way to romantic whimsy and swollen-hearted emotionalism. Even when “The Souvenir” strays into heightened territory, the messiness and inconsistency of real life lie at its heart.

That’s a trick that 24-year-old film school student Julie (Honor Swinton-Byrne, daughter of Tilda) has yet to learn, as the film opens with her earnest pitch for a planned graduation feature. A dour-sounding kitchen-sink drama set in the working-class shipyards of Sunderland, a milieu far removed from her comfy upper-crust upbringing in southeast England, it’s met with limited enthusiasm. It’s the early 1980s, and while Julie is compassionately driven by her liberal resistance to Thatcher-era inequality, she also hasn’t quite learned which stories are hers to tell — partly because, from her expensive, semi-bohemian apartment in London’s moneyed Knightsbridge district, none of the stories in her immediate eyeline seems terribly urgent.

Enter raffish, damaged Anthony (Tom Burke) to complicate her narrative. A pinstripe-clad Foreign Office dogsbody with a passion for art history, he exudes a precociously worldly, sophisticated air that turns out largely to be stale cigarette smoke and mirrors. Julie herself is too socially and romantically inexperienced to perceive the range and extent of his addictions and deceptions, though to any onlooker, he’s a walking red flag in a dicky-bow tie, clinging for dear life to a bright young woman ill-equipped to support that level of need. Joe Jackson’s “Is She Really Going Out With Him?” is a brazenly on-the-nose music cue for Hogg to deploy at this point, but it speaks for all of Julie’s friends and family too politely reserved to ask that very question. (Save for one insufferably self-regarding filmmaker acquaintance, played in a riotous cameo by Richard Ayoade, who frames the query in different terms: “I’m trying to work out where you two tessellate here,” he drawls.)

If Anthony is a fraud, however, the love between them is entirely, desperately real, to the point of mutual destruction, and Hogg — drawing on her own experiences as a naive film student — portrays it with skin-prickling tenderness. That the audience, like Julie, is caught in agonized loop between wanting this hopeless relationship to end itself or mend itself comes down to the intensely interlocked performances of Burke and Swinton-Byrne. They sell you on the couple’s sensual and intellectual chemistry even as they occasionally stare at other in raging incomprehension, as if each facing an extra-terrestrial impostor: “The Souvenir,” more than many an odd-couple romance, gets the petrifying alienation that sometimes comes with profound intimacy.

Burke is entirely extraordinary as an internally collapsing man trying to hold everything together with expensively tailored privilege. His face sometimes forgets its default above-it-all sneer to reveal a terrified, boyish void, while his best line readings — “Sincerity isn’t enough,” he tells Julie at one point — trail off from arch confidence into plunging, involuntary sadness. In her first adult role, a decade after appearing alongside Swinton in “I Am Love,” Swinton-Byrne beautifully plays a formless woman at varying stages of self-awareness, her backbone forming before our eyes as her heart splits into fragments. Swinton, of course, plays her mother once more, this time with a droll sense of bourgeois ineffectiveness: “It’s terribly complicated,” she simpers as dinner-table conversation turns to then-topical IRA bombing campaigns, in a tone that betrays no understanding of life outside her cream cashmere world at all.

As acutely observed a period piece as “The Souvenir” is — in recreating the apartment of Hogg’s youth, Stéphane Collonge masterful production design nestles a world of transitional details into its oatmeal ’80s surfaces — its self-effacing class politics could hardly feel more 2019. As Julie wrestles at once to check her privilege and assert her individuality, Hogg herself tacitly addresses critical commentary about the genteel white backdrop of her work to date, and her film shifts its stance in the process: What begins as a witty, piquant dissection of “rich people problems” blossoms, in time with its painfully maturing protagonist, into more forgiving, devastating exploration of loss, both of others and of the self. “I don’t want to live my life in that bubble,” Julie admits later, as she pitches her misbegotten Sunderland film to another skeptical panel; in this warm, lovely shiver of a film, Hogg brings her fragile alter ego to the very brink of bursting it.