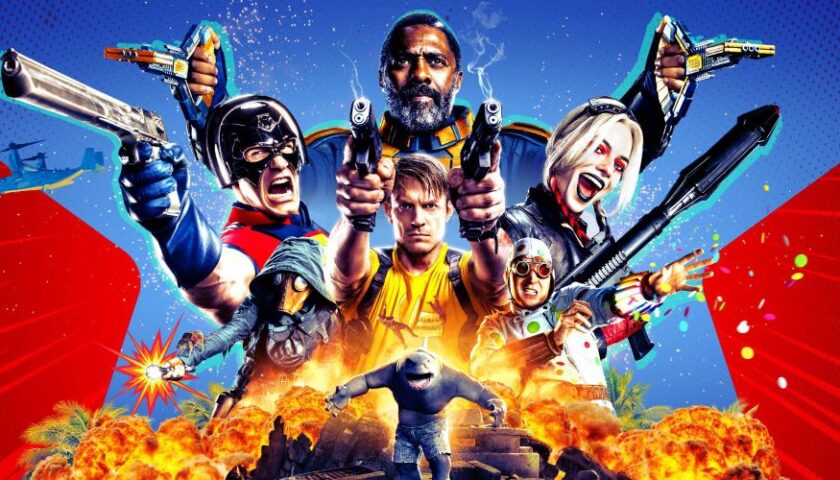 There are two things that James Gunn does better than just about anyone else on the planet: One is making glossy mega-budget superhero movies that still march to the beat of their own drum (e.g. “Guardians of the Galaxy Vol. 2”), and the other is making over-the-top gore-fests so gross they straddle the line between indie cinema and outsider art (e.g. the darkly satirical “Super,” which in hindsight seems like a mission statement). Gunn might be the only person to direct blockbuster tentpoles for both Marvel and DC, but he’s still the guy who co-wrote Troma’s “Tromeo and Juliet” at heart. And by the time the opening credits of “The Suicide Squad” are spelled out in the head blood that seeps from a supporting character’s freshly exploded skull, it’s clear that he always will be.

The most fun and least depressing superhero movie in a very long time, Gunn’s deliriously ultra-violent “The Suicide Squad” wears the yoke of its genre with a lightness that allows it to slip loose of the usual restraints, if not quite shake them off altogether. It must be liberating to make a $150 million (give or take) mulligan for a widely maligned disaster that still managed to gross almost a billion dollars despite becoming a punchline along the way, and that’s really what this unhinged carnival of R-rated cartoon mayhem amounts to at the end of the day: Not a reboot of or a sequel to 2016’s “Suicide Squad,” but rather a second draft.

In the brief yet purgatorial history of superhero movies — which once gave us three different Spider-Men in the span of nine years — we’ve never really gotten the chance to watch such wildly divergent takes on the same characters, played by several of the same actors, in the same cinematic universe. And while the tone of Gunn’s film isn’t far removed from that of its misbegotten predecessor, this one actually has the chutzpah (and the creative freedom) to make good on Harley Quinn’s whole “we’re bad guys — it’s what we do” routine. Sometimes the difference between a strike-out and a home run is just a slightly harder swing at the ball and some help from a giant alien starfish who grows bigger each time one of the vile flying pods it excretes from its body face-hugs a new victim and indoctrinates them into the hivemind (or hive… central nervous system). But we’ll get there.

First we have a premise to set up and a team to build, and Gunn’s script leverages — and subverts — genre expectations on both fronts. Most of these movies tend to start with a mess of unrelated mishegoss before the main story kicks into gear, but “The Suicide Squad” ambles out of the gate with the confidence of a movie that’s totally comfortable in its own skin (even if that skin is a technicolor patchwork of glowing polka-dot-like tumors). Once again the action begins inside Belle Reve prison, where ruthless fed Amanda Waller (Viola Davis) uses the local population as her personal draft pool from which to recruit black ops teams of supervillains in order to do the dirty work that America’s government would rather deny. “I’d do anything to get out of this hellhole,” carps one of the inmates. “Welcome to anything,” Waller replies.

And that’s it. What more do you need? The next thing you know, a long row of weirdo killers are walking toward a military plane in slow-motion and waiting to be dropped onto the beach of a fictional Central American country named Corto Maltese (an evocatively performed role that’s split between Panama and Pinewood Studios). Why are they going there? They don’t know, and some of them won’t survive long enough to find out; the bench of C-grade comic book characters that Gunn has assembled here is so deep that his movie can explode half of them into small pieces without missing a beat.

Needless to say of a team that includes a humanoid weasel (Sean Gunn) and Pete Davidson, the goofy rogue’s gallery of “The Suicide Squad” cleaves much closer to the Mystery Men than it does to the posturing group of amoral badasses who featured in the previous film; if you’ve ever wanted to see the DCEU adopt some of the sarcastic, wide-eyed, “am I really fighting alongside a homicidal raccoon?” energy of “Guardians of the Galaxy,” this is definitely your lucky day. But here Gunn is able to push the envelope much further than he ever was on the other side of the fence, and while some of his characters are more compelling than others, all of them are dressed with a degree of moral compromise that the Avengers and their friends have only worn as cosplay.

That starts with John Cena’s Peacemaker, an almost parodically swole mega-patriot who acts like a lovable cross between Captain America and Madison Cawthorn, and says things like “I cherish peace with all my heart — I don’t care how many men, women, and children I need to kill to get it” (Gunn’s digs at the United States’ foreign policy aren’t exactly subtle, but at least he never backs down from them). Cena’s strongman comic schtick is so much funnier when it belies a certain weakness, and “The Suicide Squad” uses him more effectively than any movie since “Blockers.” Although you’d have to go all the way back to the end of 1988’s “Akira” to find a precedent for the “cool but imminently catastrophic” level of vein-bulging that’s happening in Cena’s biceps here.

Idris Elba’s Bloodsport provides the perfect foil for Peacemaker, as the two push each other toward the possibility of redemption — the kind of redemption they both need more than ever after a hilarious sequence in which the Suicide Squad obliviously lights up some of the Colto Maltesian guerrillas who are staging a coup against their corrupt dictatorship. Playing a veteran sharpshooter who just wants to keep his semi-estranged daughter (Storm Reid) out of jail, Elba brings a degree of weariness to this superhero that genre audiences typically have to supply themselves.

His performance is so grounded that even his scenes alongside the bipedal King Shark Nanaue feel rooted to reality (a winsome CGI creation who acts like the lovechild you never thought the Hulk and Jaws could physically conceive together, Nanaue is voiced by Sylvester Stallone in the role he was born to play). “The Suicide Squad” may not offer quite as many indelible images as you might expect from a “Dirty Dozen” riff about deadly assassins, vermin-obsessed millennials (Daniela Melchior shines as Ratcatcher 2), and introverts plagued by inter-dimensional viruses (David Dastmalchian as Polka-Dot Man) teaming up to fight a kaiju-sized echinoderm, but the sight of Elba wearing a sleeveless undershirt and a superhero helmet at the same time is borderline iconic unto itself.

That it also succinctly articulates the rough-and-tumble way this movie reconciles absurd genre tropes with relatable human stakes is just icing on the cake. A lot of superhero movies like to masquerade as “cold war thrillers” or “war epics” or whatever because their directors are rightfully embarrassed by the narrowness of contemporary studio filmmaking, and while Gunn would rather gasp for air within the suffocating confines of that system than fight to dismantle it from the outside, “The Suicide Squad” is the rare blockbuster of its kind that actually feels like the “men on a mission” classics that studio executives used to greenlight before spandex cut off all the blood-flow to their brains.

That the vast majority of Gunn’s movie is set on a small island helps keep “The Suicide Squad” focused on the task at hand. As busy as this story can be — I haven’t even mentioned Harley Quinn’s princess saga of a romantic subplot, Alice Braga’s role as a young revolutionary, or Peter Capaldi’s turn as a mad scientist with a taste for strip clubs — all but the film’s most superfluous asides pool together in the same place by the end, and each of them adds to the body count from America’s unique brand of “liberation” along the way. It also goes a long way that the (very) big bad is gnarly and sympathetic in equal measure; superhero fare always gets swamped in CGI overload during their third acts, but Starro is light years removed from the murky brown goop monsters who tend to end these movies with a whimper. Even after the protracted siege that’s stretched over the back half of this saga, the final battle that follows makes your eyes widen rather than glaze over.

Given that “The Suicide Squad” only works so well because Gunn was empowered to go a little nuts, it’s hard to get hung up on the bits that don’t pull their weight — any decent suicide squad comes with a few casualties along the way. While Gunn’s use of Harley Quinn is judicious and clever even before she gets to be center stage for the movie’s cleanest action setpiece, the character desperately needs to evolve if DC is going to keep leaning on her, and layering her within larger ensembles isn’t going to work for much longer (the same holds true for Gunn’s counterintuitive needle-drops, which have lost their luster even if Louis Prima is a great pull). Unsurprisingly, Harley is reduced to a vessel for Gunn’s stubborn juvenile streak; dialogue like “I love the rain, it’s like angels splooging all over us” can’t help but sour the batting average of a movie where even the quietest moments are tweaked into laugh riots.

In fairness to Robbie, “The Suicide Squad” hits a speed bump whenever it slows down to spotlight a single member of the team. And yet, if Polka-Dot Man’s obsession with his mother grows less amusing every time we see her face, Gunn’s commitment to the bit amid the chaos of everything else is inextricable from the energy that elevates this movie above the product it’s selling. Even the flattest beats are worth the feeling that Gunn got to do what he wanted; that Warner Bros. didn’t note this thing to death; that Weasel might return one day when we need him most. And if you don’t appreciate just how refreshing that is, stick around for a post-credits stinger that will remind you of how grimly synergistic these things can be. If the movies are killing themselves with superhero overload, at least “The Suicide Squad” suggests the medium will go down laughing.