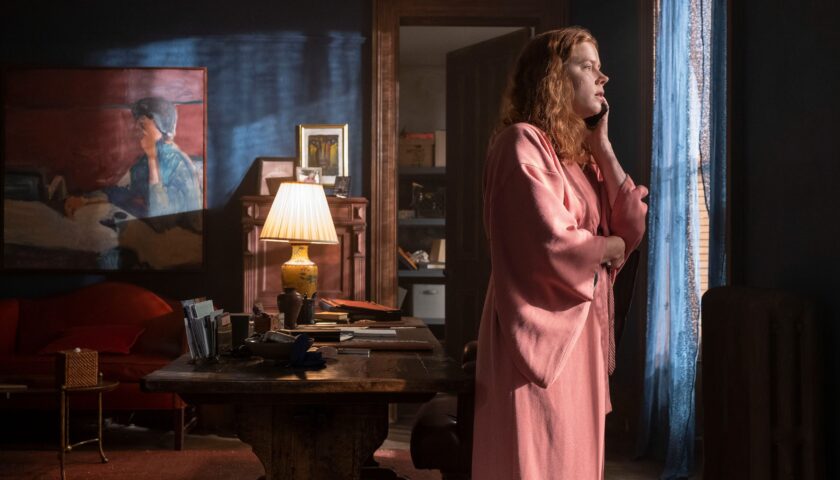 The Woman in the Window 2021 Movie Review Poster Trailer Online

“The Woman in the Window,” an overstuffed, floridly preposterous psycho-thriller starring Amy Adams, is the kind of movie that would love to be described as Hitchcockian. But the resemblances are cosmetic at best; really, a better term might be “Hitchcocky,” which comes closer to capturing its brand of swaggering, self-conscious homage. A meticulously controlled frenzy of a movie, it’s less interested in reproducing Hitch’s mastery of suspense than in repurposing his most famous twists and tropes, pelting you with strenuously clever parallels to “Vertigo,” “Psycho” and the like — and that’s not even mentioning the lodger, the vanishing lady or one hell of a family plot.

Busily directed by Joe Wright and adapted from the controversy-stirring 2018 bestseller (more on that later), “The Woman in the Window” is most obviously indebted to “Rear Window,” cheekily updating that Hitchcock classic for an era of smartphones, intercoms and antidepressants. The shut-in turned amateur sleuth here is Dr. Anna Fox (Adams), a child psychologist waiting out a severe case of agoraphobia in her multi-story New York brownstone. Anna has a husband (Anthony Mackie) and a young daughter (Mariah Bozeman) who no longer live with her, though we do hear them on the phone and see them in flashbacks. For company she has only her cat, Punch; a basement tenant, David (Wyatt Russell); and a therapist who occasionally pops in. (He’s played by Tracy Letts, who also wrote the script.)

For entertainment Anna has a shelf full of glorious old movies that she watches and rewatches obsessively, including “Laura” and “Dark Passage” — two sly meta-warnings to the audience to be on the lookout for red herrings and mistaken identities. I should note that, as a lover of vintage Hollywood crime pictures myself, I’m generally sympathetic to any movie that geeks out over them too. The danger of dropping a few frames of Lauren Bacall or Gene Tierney into a patently inferior entertainment, of course, is that the pleasure of seeing their faces might well inspire more resentment than gratitude. It’s never a good idea to risk asking the audience: Wouldn’t you rather be watching something else?

Anna, as it happens, is soon distracted by alternate entertainment sources of her own. A much more dangerous kind of thriller begins playing out in the house across the street, where the Russells, a family of three, have just moved in. The first Russell she meets is 15-year-old Ethan (Fred Hechinger), who comes over for a visit and gives off awkward-sensitive Norman Bates vibes. Fittingly, his mother (a breezily insinuating Julianne Moore) is the next one to stop by, and like Ethan, she seems friendly if slightly off at first. There’s something particularly dodgy yet revealing about the way she describes Ethan’s over-controlling father, Alistair (a belligerent Gary Oldman), as if she were trying to both confess and suppress a guilty secret.

That something sinister is afoot becomes frighteningly clear when Anna peers out her window one night and sees a ghastly crime being committed in the Russells’ home. But is she really seeing what she thinks she is? The abundance of unsubtle off-her-rocker imagery — which includes a shot of her peering intently through the slats of an actual rocking chair — suggests otherwise. Once Anna screams bloody murder and the police show up (Brian Tyree Henry plays a friendly detective), their toughest questions are directed not at Alistair, but rather at Anna’s increasingly tenuous grip on reality. This surprises Anna but will surprise no one else, given her general dishevelment, increasingly rattled air and alarming habit of mixing wine with prescription meds.

Like the female protagonists of “Gone Girl” and “The Girl on the Train,” two earlier thrillers that also made the leap from page to screen, Anna is a classic unreliable narrator. She might also be an unwitting (and more sympathetic) stand-in for her scandal-ridden creator, Dan Mallory, who wrote “The Woman in the Window” under the pseudonym A.J. Finn and whose history of lies about his life and career was brought to light in early 2019. That’s a lot of baggage to saddle any movie with, even one that’s been sitting around as long as this one, which was delayed first for reshoots and again by the COVID-19 pandemic. Given the circumstances, the postponements may have been a blessing. If you find yourself thinking about tortured literary controversies during “The Woman in the Window,” it can only be because they’re rather more interesting than the movie itself.

Really, the most interesting thing here may be the marshaling of so many smart people in service of a misfire that probably seemed like an intuitive showcase for their talents. In the scripts he’s adapted from his own plays (“Bug,” “Killer Joe”), Letts has demonstrated his facility for staging psychological breakdowns in close quarters. And Wright, in his own previous literary adaptations — including “Atonement,” speaking of unreliable narrators — has proven admirably willing to treat the camera as an active participant in the telling, using the formal resources of cinema to liberate his stories as much as possible from the printed page. It hasn’t always worked, but the results have never been dull.

Until now. In “The Woman in the Window” the director tries — oh, how he tries — to approximate the boozy, bleary-eyed experience of Anna’s day-to-day. There are “Vertigo”-style winding staircases, extreme close-ups of Anna’s eyes popping open (echoing the Salvador Dali dream sequence from Hitchcock’s “Spellbound”) and a relentless Danny Elfman score that, when it’s not humping Bernard Herrmann’s grave, seems to be channeling the singsong voices in Anna’s head. The most fascinating aspect of the production may be Anna’s ramshackle house itself, whose dimly lit, sparsely furnished spaces become a sort of artificial playground for Bruno Delbonnel’s camera to wander. Here, as in Wright’s vividly stylized “Anna Karenina,” the blatantly theatrical staging and deep-focus widescreen images create an almost Brechtian detachment, as if to suggest that Anna (Fox or Karenina) is caught up in the theater of her life.

That’s an intriguing conceit. It also has the effect of draining any real suspense or tension from the material and keeping Anna’s demons entirely on the surface. That’s a shame, given how effortlessly deep Adams can go when left to her own devices. Having already played an intrepid crime solver staring down alcoholism and personal trauma in the 2018 miniseries “Sharp Objects,” Adams tries, as always, to make intelligent choices, to underplay the intensity and avoid the obvious. She works against the freneticism of the filmmaking, emphasizing Anna’s moments of groundedness and lucidity as well as the instinctive empathy that likely made her a good psychologist to begin with. By rights she should be the centerpiece of a great and genuinely Hitchcockian thriller. This one is for the birds.

The Woman in the Window 2021 Movie Review Poster Trailer Online