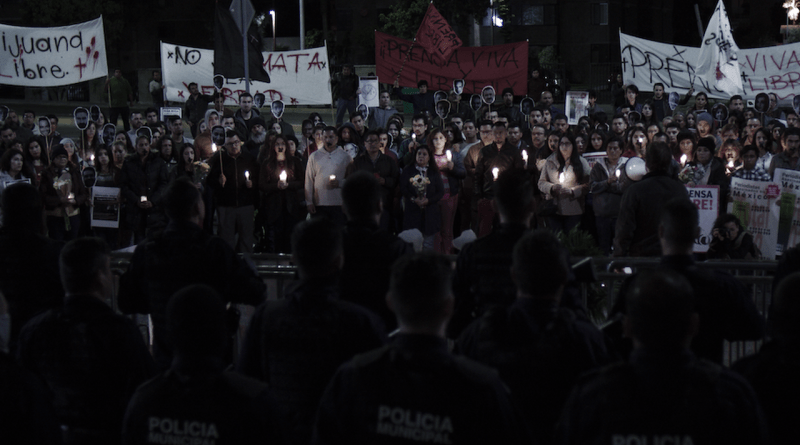 Review: Tijuana follows a group of journalists in Mexico as they go all out putting themselves in the path of danger to uncover the truth. After a local politician is murdered we follow the team as they work against all odds to discover the motive of the victim’s killer. Journalism is often regarded as a risky career path but in Tijuana, the risk is on a whole new level; no longer are journalists fighting for the truth but now they are fighting for their lives.

With journalists around the world under constant threat from those who seek to silence their own discrepancies and wrongdoings, it is not a surprise that journalists are often victims or targets for murder. Unfortunately, the path for honesty and transparency is a treacherous one that will open many doors that were locked up tight for a reason. Netflix has teamed up once again with Fusion Media Group to create this 11-part series exploring themes of scandal, corruption and dangerous journalism. After Fusion Media Group’s success with El Chapo detailing the rise, capture, and escape of a notorious Mexican drug lord Joaquín “El Chapo” Guzmán, Tijuana was created with great expectations and big shoes to fill. Tijuana is certainly proactive in showing all walks of journalism, giving an in-depth look at different examples and styles of investigation and interviewing from all roles of a newspaper team. On the other hand, as expansive and interesting as these ‘behind the green curtain’ scenes may be, they just do not offer much in the way of fuss or trepidation for what’s to come.

Tijuana is certainly a slow burner in pace, the first few episodes are merely scene-setters for the larger picture. As essential as these episodes may be, they certainly don’t set up any feelings of anticipation or excitement for future episodes. This series, unfortunately, failed to be gripping, after the lengthy and often seemingly unnecessary scenes of dialogue and ‘filler’ it was hard to be enthralled by any scenes of action or drama. Even so, the ‘dramatic’ scenes were often cut short or felt untapped in their potential for dramatic effect. Giving credit where it is due, the cast should be highly commended with their portrayals of the characters. Where emotion and human reaction took precedent the cast truly demonstrated their refined skills, illustrating superb authenticity with raw and convincing receptivity.

Although not exciting in its entirety, Tijuana still delivers some very profound and far-reaching messages. The show works to raise awareness and understanding of the risks that journalists take in order to deliver the next big ‘scoop’ to its readers. According to Forbes.com the Committee to Protect Journalists has released figures detailing the loss of 30 journalists murdered in Mexico since the year 2009. Tijuana is integral in order to paint a rather distressing portrait of the real-life actualities that face journalists around the world, and in this case Mexico. Although not immediately relatable to all audiences Tijuana may help to create a better understanding of the costs of delivering the news. The cost of something we as readers far too often take for granted as we sit with our morning paper or flick through the latest news websites without a second thought for how these stories were brought to our attention in the first place.

Overall Tijuana is a fairly enjoyable watch if you love crime thrillers and revel in the chase of a ‘who did it’ series. Personally, the series lacked character and pizzazz, with scenes leaving me dissatisfied as I was willing the show to just be a little bit more enthusiastic about the apparent dangers on screen. Although gaining momentum later in the series the lax pace of the character and narrative introductions in the first few episodes left a sour taste as I wondered ‘when is it going to get juicy?’ The anticipation for more was too long lived and contributed to a feeling of dissonance for the impassioned or poignant moments later on as Tijuanafinally picked up speed. Regardless, Tijuana is still a well made and sophisticated show that deserves attention for its subject and cast who marvelously entice you to root for their cause. A cautionary tale and one that helps audiences to acknowledge those who have lost their lives in the fight for our right to the truth.