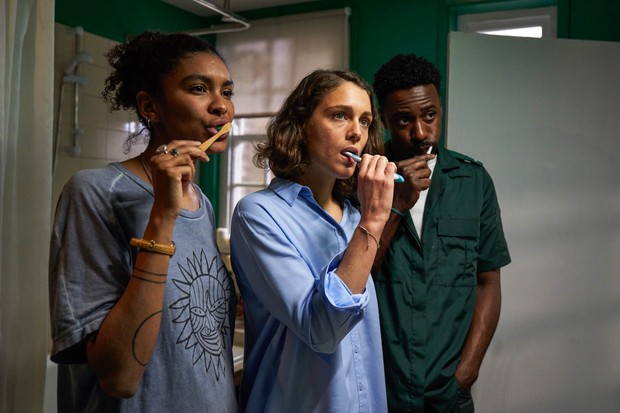 BBC Two’s Trigonometry lives up to its name in the sense that it can be confusing and sometimes a bit dull. The series explores the friendship between three thirty-somethings as it gradually evolves into a polyamorous romance. Emphasis on gradually.

This eight-part series is a very slow burn and from a certain perspective you can understand why. After all, it would be easy to jump straight in and tell this story with all the subtlety of a tabloid exposé. Admirably, Trigonometry goes in the opposite direction.

The show spends a lot of time setting up its three central characters and putting them on their plodding collision course. There’s a palpable sense that the filmmakers want this relationship to feel truly authentic, like something that could happen to anyone in the right circumstances. But it doesn’t.

Kieran (Gary Carr) and Gemma (Thalissa Teixeira) have been together for a number of years. They have some issues and are argument-prone, as is often the case in a long-term relationship, but they love each other dearly and that really comes across on screen. Carr and Teixeira are great together, establishing themselves as a likeable on-screen couple almost instantly with a very charming dynamic.

But along comes Ramona (Ariane Labed), known to her friends as Ray, a lodger they welcome into their home for the sole purpose of making life more affordable. Both Kieran and Gemma become enamoured with her, just as she does with them, ultimately putting their relationship on the line to be with her as a trio.

The issue with this arrangement is twofold. First, while Ray is a kind and thoughtful person, it’s hard to imagine why a couple would completely upheave their life for her. For one thing she’s unbearably naive, frequently displaying an almost childlike innocence that you would think might get tedious.

Second, the crucial element of this arrangement is that Kieran, Gemma and Ray all love each other completely equally. Except it doesn’t really feel that way. From the outset, Gemma shows significantly more interest in Ray than Kieran does. It seems to contradict the idea that the addition of a third party doesn’t detract from their long-standing connection.

The script goes round in circles trying to explain this issue away, but only succeeds in deteriorating Gemma and Kieran’s individuality. Although introduced as distinct and accomplished people – an ambitious small business owner and a selfless paramedic – they devolve into complete codependency on a woman they’ve known for mere months. Perhaps Ray should consider a career as a cult leader.

The problem is that Gemma and Kieran are simply too strong a pairing to begin with, their chemistry so electric that you don’t wish for it to be disrupted. It’s a fatal flaw for a series that relies so heavily on depicting a compelling polyamorous relationship. Ultimately, the strongest elements of Trigonometry occur elsewhere.

You will probably find yourself more invested in Kieran’s struggle maintaining a work-life balance or the fate of Gemma’s fledgling cafe, rather than whether the pair of them work things out with Ray. It’s a relationship in which the stakes just never feel high enough.

As a result, it isn’t much more entertaining than scrolling through Instagram posts from your coupled-up friends. Sure, you’re happy for them but you don’t need to know every tiny detail.