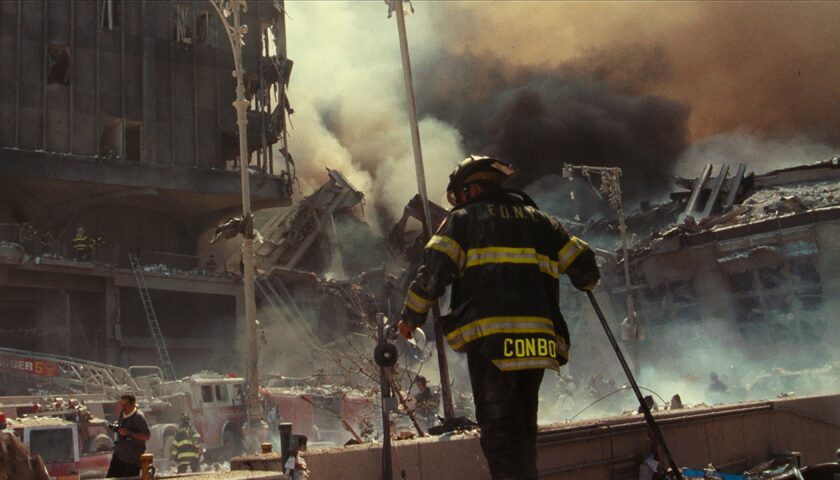 Turning Point: 9/11 And The War On Terror is a five-part docuseries, directed by Brian Knappenberger, that examines what led to the 9/11 attacks, including the mistakes and failures of the U.S. government along the way, and then traces the long tail of the attacks through our wars in Afghanistan and Iraq, our use of torture for intelligence gathering, and just how the attacks were a turning point for how our country has operated in the 20

A quiet shot of Boston and Logan International Airport. Then audio of air traffic control clearing American Airlines flight 11 for takeoff is heard. The audio is from September 11, 2001.

The first episode rightfully argues that before the 9/11 turning point, the original turning point that sent the world down this path was in 1979, when the Soviets invaded Afghanistan. After a long cold open that goes over the attacks on both of the World Trade Center towers, with the harrowing footage of both American Flight 11 and United Flight 175 crashing into their respective towers, we go all the way back to that Soviet invasion.

Talking to a combination of experts and people who were engaged in the battle at the time, from mujahideen leader Gulbuddin Hekmatyar to Milton Bearden, a CIA operative in the country, Knappenberger lays out how the U.S. aided the rebels that were fighting the Soviets. But soon after the Soviets left in 1989, there was a vacuum of power, with tribal rule taking back over, leaving room for Osama bin Laden to join an Arab push to fight in the country’s resulting civil war. It also left room for one of the warring religious groups, the Taliban, to consolidate power.

Also discussed is the first bombing of the WTC in 1993, led by acolytes of what became al-Qaeda, and then the first attacks bin Laden and al-Qaeda were able to execute: The bombings of the U.S. embassies in Kenya and Tanzania, then the bombing of the U.S.S. Cole. The plots that were foiled at the last second, though, made those look like dress rehearsals.

While we weren’t looking for another minute-by-minute found-footage series like the one on Nat Geo, we were a little perturbed at just how Turning Point treats the attacks. While the narrator and interviewees say it’s one of the most consequential days in U.S. history, the music and tone of the opening segment makes it look more like a true crime series on Investigation Discovery and not a reverent take on 9/11.

It’s still too soon to be treating 9/11 like it’s just another historical event. It’s obviously needed to talk about the War on Terror that dominated our foreign policy until at least the mid-2010s. But it feels like Turning Point takes a half-measure, going over that day in some detail but glossing over what truly made it horrifying to the people who lived through it or people like us, who were just in the tri-state area.

And, at least so far, none of the information that is given about how we funded the mujahideen in the 1980s and how it came back to affect us as bin Laden and the Taliban grew their respective spheres of influence is anything that is new. Any number of news reports, analysis and documentaries, even ones that were created in the years immediately following 9/11, has given the same information. Putting it all in one collective context makes sense, but we wonder if this is for people whose heads have been under a big rock over the past two decades.