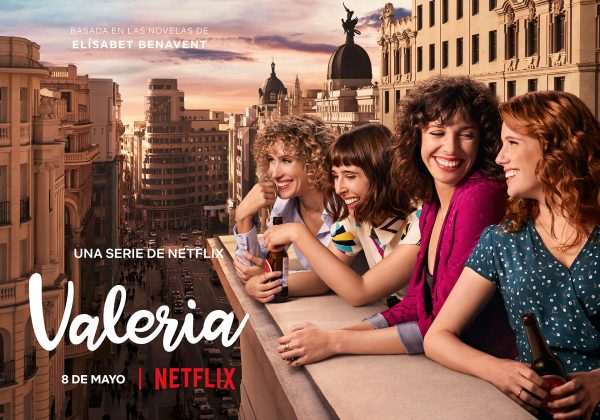 On the same day Netflix treats audiences to a second serving of Dead to Me, Spanish creatives throw their hat in the ring with a series that reverberates around a career and marital crisis. Netflix’s Valeria follows writer Val that feels a void in her marriage and her writing.

I’m sure many writers have felt these crises before.

Valeria is on-beat from the start, attracting audiences with Val’s friends — an exuberant group of women flying to self-discovery. In a nutshell, the Spanish series Valeria is all about discovering oneself within a world of wit and humor. The opening premise sees Val and her friends conquering the world but at a loss — estranged husbands, affairs, and career mismanagement.

It’s easy to engage with Val from a personal standpoint — statistically, most people are in jobs they do not love, masking their true passions in the depths of their spare time. Val is that character in Valeria — required to make ends meet and honour her husband’s wishes, but you can sense from the offset that she requires more in life — a general happiness that she’s realised is missing.

Valeria is a witty and romantic female-led series but another attraction is Val’s new creativeness that delves into erotica storytelling born from excitement from a distracted gaze on a new man that intrusively remains in her mind — in her frustrating world with agitated but fun friends, Val navigates a new way of writing that helps accomplish a longlasting premise. Season 1 has only 8 episodes, but they are not overlong and it does well to abide with its momentum.

While it would be foolish to say that Valeria season 1 is a match for Dead to Me this weekend, it’s certainly a Netflix series to consider once you’ve binged through Liz Feldman’s masterpiece. María López Castaño’s Spanish series could be the dark horse you are looking for amongst those well-used thumbnails during a world crisis.