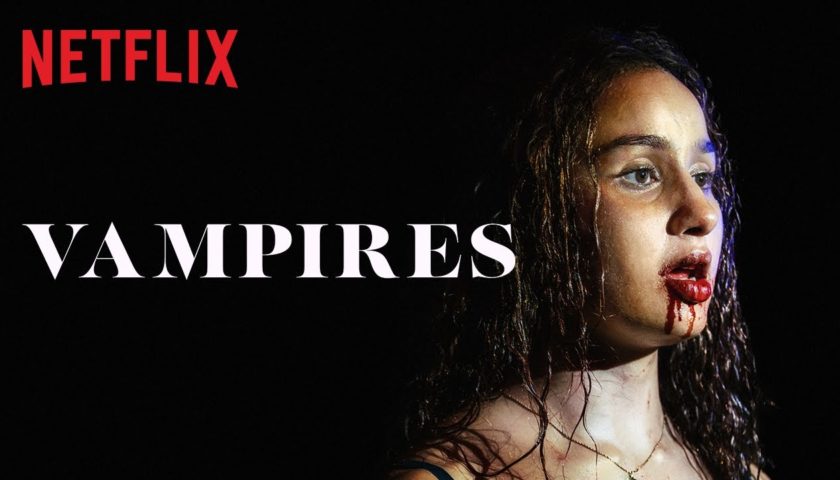 Per its title, French Netflix series Vampires is about vampires, not Frankensteins or Creature from the Black Lagoons or Frankenstein’s monsters. If it was about one of those other subjects, it might not feel the hot breath of so many other series down its neck — vampires might be even more pervasive in movies and TV than zombies, which is saying a lot. It’ll inevitably be compared to heavies like The Strain, The Vampire Diaries, True Blood, The Originals, Dracula, the other Dracula, the truly immortal Buffy the Vampire Slayer and, um, Vampirina, just to name a few. Vampire mania has crested and ebbed, so Vampires better be exceptionally well-written, -conceived and -directed to combat our vampire ennui.

Opening Shot: An establishing shot of Paris. The sun shines. It’s a gorgeous day — but don’t believe it for a second, because the music rumbles ominously.

The Gist: Fifty years ago, a genetic mutation spawned vampires, who live among us, except underground and at night, because sunlight, it burrnss themmm, it BURRRNS THEMMMMM! Of course, they crave blood, and their existence is mostly unknown by normals, except maybe manufacturers of blackout curtains, who probably suspect something, but aren’t saying anything, because sales have been robust since 1970.

Subtitle: PARIS, 2003. Martha Radescu (Suzanne Clement) attacks the crap out of Csilla Nemeth (Kate Moran), the queen or whatever of the vampires. An angry Martha alludes vaguely to something that happened to her husband. She hurls accusations and shoves Csilla’s face into a sunbeam, which is good for cats, but not for vamps. Somebody get Csilla some aloe vera, please. Jump ahead 17 years. All vampires genuflect to Csilla, except Martha and her four children: Rad (Pierre Lottin) and Irina (Juliette Cardinski) are adults, and presumably from a different father than 20ish Andrea (Mounir Amamra) and high-schooler Doina (Oulaya Amamra). Martha makes the latter two take pills to suppress their vampiric tendencies — they don’t scorch in the sun or crave blood like their mother, who pours it into a decanter and decants it into a teacup and drinks it red, without cream or sugar. The elder offspring exhibit more typical tendences, including extreme sexiness and extrahuman strength and agility; they love to prowl Paris at night, breaking into the zoo and snacking on peacocks and coyotes. They all live together in a dingy ninja turtle lair beneath the city.

This is mostly Doina’s story, though. She goes to normal high school with regular kids and wants to fit in, especially because she has a crush on Nacer (Dylan Robert). But maybe she doesn’t want to be so normal. Rashes on her arms are side effects of the pills; when the principal requests that her mother stop in for an appointment, she unleashes another bevy of lies, and he’s starting to see through them. One day after school, a masked dude in a hoodie hands Doina a note from Csilla, who summoneth Martha and her clan to visiteth her; Csilla runs the Community, a vampire conglomerate that protects its members from detection, and appears to be run like your average quasi-fascist neighborhood or condo association, right down to the drinking-blood part. They’ve left Martha and her kids alone until now — Rad and Irina contacted the Community because they need new fake IDs and are tired of living in exile. Meanwhile, Andrea convinces Doina to stop taking her pills; doing so didn’t affect him at all, but she experiences an awakening, and suddenly, she’s stronger than the other teenagers, and Nacer looks delicious like a Hemsworth looks delicious, but also like a warm cherry pie looks delicious.

Of course, it adheres to some cliches, embracing fetishy sex and gore, and it hasn’t seen a scummy set piece it didn’t like. It’s not tentative, and moves quickly and confidently, neatly blending entertainment value with character development. Creators Benjamin Dupas and Isaure Pisani-Ferry aren’t exactly breaking new ground here, adhering to the usual atmospherics and cheekiness of many a vampire saga before it. But it shows promise and a little ambition. One episode in, and so far, so good.