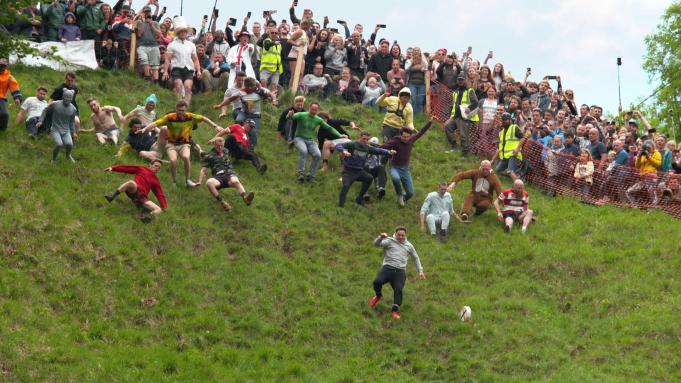 Netflix has announced that The Office’s Rainn Wilson will be executive producing and narrating a quirky new competition series titled We Are the Champions. The show, which is slated to debut on November 17, will feature “unusual competitions around the world… including cheese rolling, chili eating, fantasy hair styling, yo-yo, dog dancing, and frog jumping,” according to Variety. In other words, the show sounds like an attempt to try to wind 2020 down with a light-hearted salve to what will no doubt be an exhausting final few weeks of the year.

“We Are the Champions’ celebrates weirdness, finds beauty in idiosyncrasies, and demonstrates what it really takes to rise to the top: heart,” Wilson said. “As a self-proclaimed expert on the unconventional, I’m excited to introduce viewers to these small-world competitors with big-world dreams because, in this time, we could all use a hero–be it a dancing dog or the world yo-yo champion.”

Chris Uetwiller, CEO of the show’s production company, Dirty Robber, added, “In a TV landscape that can be rather formulaic at times, We Are the Champions represents something refreshing and different.” He also emphasized that the show is about storytelling that will surprisingly move people, asking, “Who knew people would ever be moved by cheese rolling?”

The show also bookends a year that similarly kicked off with Wilson’s The Office co-star Jim Krasinski starting a new project in March to combat great stress and uncertainty. Krasinski’s YouTube series, called “Some Good News,” had a quick, strange, and somewhat divisive journey from a feel-good one-off to a series that garnered more than 2 million subscribers and netted around 70 million views to then being acquired by GameSpot parent company ViacomCBS for the CBS All Access app. The show has not yet debuted on CBS All Access, but Krasinski announced he would no longer star–and the shift also meant that an adorable once-free show has now been locked behind a streaming paywall.