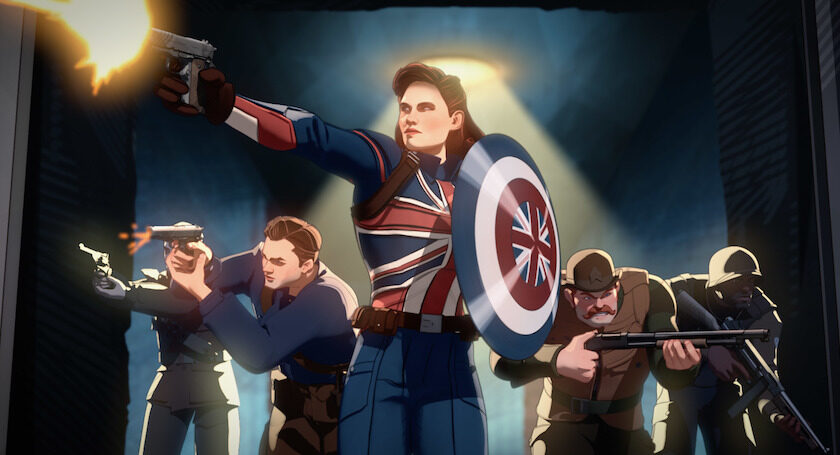 “What If…?” presents a bit of a paradox, and not just because of the series’ timeline-warping synopsis. This is perhaps the most Marvel Cinematic Universe title yet, given that viewers who already have a keen understanding of the franchise’s key plot arcs and an attachment to its myriad of characters will undoubtedly get the biggest kick out of each episode. The show is also a self-perpetuating product that has obvious potential to endlessly exploit the MCU IP in order to create sequels (Season 2 is already in development) and spinoffs that should entice Disney+ subscribers to keep coming back for more, more, more.

On the other hand, “What If…?” is the first MCU installment in years that doesn’t feel burdened by the need to meticulously fit into the franchise’s canon or blatantly tease future installments. This is a breath of fresh air for Marvel diehards that manages to offer the fans exactly what they want while still clinging to a few surprises. Longtime franchise fans will undeniably get the biggest kick out of the references and in-jokes in the animated anthology series — which questions what would’ve happened at various pivotal moments of the Marvel Cinematic Universe if certain events played out differently — but the self-contained stories aren’t so convoluted they’ll turn off more casual viewers. Regardless, Jeffrey Wright is here to help the uninitiated as the Watcher, an omniscient narrator who provides a helpful bit of exposition explaining how each episode subverts an older part of the MCU.

Disney provided critics with three episodes of the series for review, and it’s a shame that the sole episode available to Disney+ subscribers at first is the least adventurous of the three by a considerable margin. Episode 1 examines a timeline where Peggy (Hayley Atwell) is injected with the first super-soldier serum instead of Steve Rogers, making this week’s titular question: What would happen if Peggy Carter became Captain Carter, America’s first superhero? Well, (slight spoiler alert) it turns out that events would play out very similarly to what happens in “Captain America: The First Avenger.” Peggy’s episode is bound to overjoy fans who are still cut up about Disney’s unceremonious cancellation of ABC’s well-received “Agent Carter” in 2016, but the episode is mostly a 1:1 re-telling of the 2011 MCU film, with only a few superficial twists and MCU tie-ins.

Fortunately, the moment-to-moment happenings are entertaining enough to somewhat offset the unimaginative plot. Every “What If…?” episode boasts a cel-shaded animation style that is an absolute pleasure to witness in motion, especially during each episode’s more action-packed moments. Peggy (and Atwell, one of many talents reprising their roles from the live-action MCU entries) makes for a stellar hero and she gets ample time to flex her super skills throughout Episode 1. There’s a lighthearted montage of Peggy massacring HYDRA soldiers in the middle of the episode, including a scene where she leaps between planes high in the sky, that is so unabashedly cartoonish — the sound effects hearken back to the live-action 1960s “Batman” TV series — that it’s impossible not to crack a smile. It would look ridiculous in live-action, as is too often the case in the CGI-fueled mayhem that defines the final act of most MCU films, but the animation style of “What If…?” makes even the most outlandish fight scenes easy to love.

After the overly familiar premiere, the second and third episodes of “What If…?” offer considerably more surprises that make good on the promises of the series’ premise. As teased in the series’ official trailer, one of the episodes centers on T’Challa (Chadwick Boseman, whose voice work here is phenomenal) as a member of the space-faring Ravagers from the “Guardians of the Galaxy” films. The Boseman episode is easily the highlight of the series’ early installments; his 30-minute adventure might be the first time viewers have seen this version of T’Challa, but Boseman and the fellow returning voice actors riff with a natural chemistry that gives the impression they’ve been trekking through space throughout several years worth of Disney titles.

To discuss more specifics about the Boseman episode would venture too far into spoiler territory, but it’s safe to say that both the character building and action-oriented moments are absolute riots made better by some truly unexpected introductions and plot twists. The MCU self-references aside, the episode stands on its own as an enjoyable slice of sci-fi superheroics. It’s akin to an episode of “Justice League Unlimited,” the 2000s-era animated show that excelled by throwing random heroes together in mostly episodic stories long before the superhero genre became so oversaturated. Such is also the case with the third episode provided to critics, which explores an idea that the “What If…?” trailer didn’t tease and I dare not spoil the premise of.

Will “What If…?” eventually tie-in to the timeline-splitting ramifications of the “Loki” Season 1 finale? Will the series lead to live-action spin-offs, as executive producer Brad Winderbaum suggested was a possibility in a recent interview? Maybe and maybe. But unlike every other MCU show on Disney+ so far, the most interesting thing about “What If…?” isn’t the ramifications that the series could have for future franchise installments. “What If…?” is doubtlessly elevated by exploiting the decade-plus canon that the MCU has built, but the show is also easily enjoyable in its own right and a reprieve from the tired focus on world-building that has defined some of Marvel’s recent Disney+ series. “What If…?” might not win over the superhero-averse, but if you’re a fan who has grown a bit fatigued of Disney’s biggest franchise recently, this could be the antidote you’ve been needing.