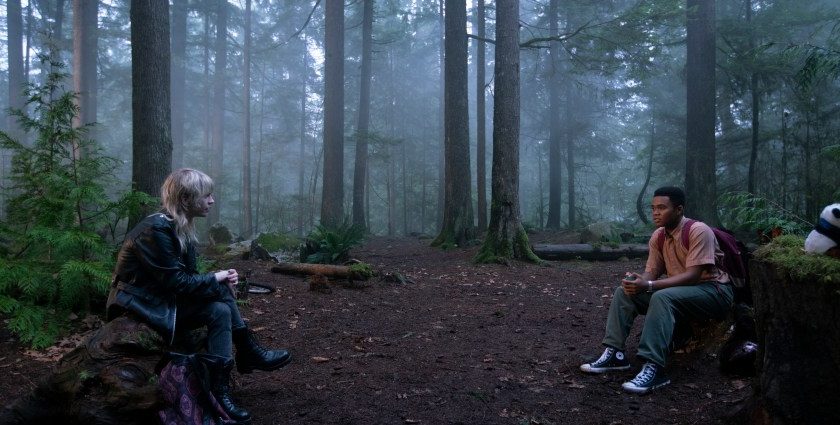 Teenage nostalgia is a big ticket right now thanks to the success of Stranger Things. And while Stranger Things is definitely guilty of engaging in nostalgia for nostalgia’s sake, there’s narrative purpose behind it as well. The characters in Stranger Things aren’t just listening to 80s songs – the 1980s permeates every level of that show, from the costumes to the sets to the storylines. The Cold War plays a huge part, as well as pop culture tropes from the time period. Stranger Things isn’t just mimicking Spielberg movies and Stephen King and 1980s science fiction and horror – it takes the tropes created by those sources and puts its own spin on them, while making sure to weave them into the overall story so nothing feels out of place.

When the Streetlights Go On attempts to make its own entry into the teenage nostalgia genre with a flashback tale set in the summer of 1995, about a murder of a high school student and teacher in a small town in Illinois. And while Streetlights is clearly excited about the opportunity to milk the nostalgia of that decade, primarily in terms of the series’ soundtrack, it does little else to justify setting the story 25 years in the past. It’s a thoroughly generic teen murder mystery plot, with occasional shots of Bill Clinton on television to remind us what decade it is. Not even the costumes seem particularly 90s – Becky (Sophie Thatcher) straight-up looks like a teenager in 2020. And the computer lab in which Charlie (Chosen Jacobs) writes his articles about the crime for the school newspaper is loaded with anachronistic laptops. There’s no narrative purpose behind the show’s setting beyond luring in viewers who fondly remember the release of Mellon Collie and the Infinite Sadness, and it doesn’t even do the work to effectively create the setting.

The story is focused on the Monroe sisters, Chrissy (Kristine Froseth) and Becky, who we’re told in somber narration by an adult Charlie (voiced by Nnamdi Asomugha) will both be dead by the time it’s all over. (The show makes liberal use of letting us know which characters are doomed, which is a device that should generally be used more carefully.) Charlie lives next door to the Monroes on a cul-de-sac in midwestern suburbia and goes to school with both sisters at the local high school. In the opening episode, we discover that Chrissy is having an affair with Mr. Carpenter (Mark Duplass), an English teacher at the high school. One night, Chrissy goes out to meet him in secret, and the two are abducted by a masked gunman, driven out into the woods, and murdered. Charlie discovers the bodies riding home through the woods on his bike, which sets off an escalating series of events that rock the small town and will ultimately put at least a few more of its young residents in the ground.

Charlie narrates the entire series, recalling the unforgettable summer as an adult. It’s a familiar device used in similar dramas like Stand by Me, and Asomugha conveys a thoughtfulness in his vocal performance that hints at a deep well of sadness surrounding the events he witnessed as a teenager. However, his narration is frequently overwritten and heavy-handed, which becomes distracting in some scenes. That might be intentional, as we’re quickly shown that young Charlie is an aspiring writer, but his narration too often comes off as a screenwriter trying too hard. I can close my eyes during those scenes and almost picture the writers hunched over a word processor with a thesaurus sitting open next to them. The narration also suddenly shifts from Charlie’s viewpoint to that of an omniscient observer – in one scene, Charlie tells us what Brad (Ben Ahlers) is thinking as he gazes into Becky’s eyes, and then tells us how Becky is feeling about the situation. Later, he narrates intricate details about Casper (Sam Strike) and Becky’s budding relationship, including events for which he was not present. These are details that Charlie couldn’t possibly know, presented about interactions he did not witness. I’d like to say it’s a choice, but the constant shift from being anchored entirely in Charlie’s point of view and then moving to an omniscient spectator just feels like extremely bad writing.

Queen Latifah plays a supporting role as the chief investigator Detective Grasso, and every part of her role is baffling. She’s created an extremely cheesy string board of her evidence, including photographs and maps scrawled with rhetorical questions about characters we have yet to meet when we first see it. We’re introduced to her as she relentlessly grills Brad, Chrissy’s boyfriend, in an interrogation room about his alibi the night of the murders, when his alibi is extremely solid – he was at basketball practice, surrounded by a dozen teammates and several spectators. We as the audience actually witness the practice, because Charlie was there taking notes for the paper before he hopped on his bike to ride home and stumbled upon the bodies. Grasso could’ve cleared Brad by simply talking to his teammates and coaches, there’s no reason to drag this grieving teenager to the police station and badger him about his dead girlfriend like a Law and Order episode. Later, she drags Brad and Casper back in because they got into a fight at school – what police detective would do that? Doesn’t she have any other leads to pursue beyond the two boys with zero motive and established alibis? (Trick question – she doesn’t, because the writers haven’t given us any clues to chew on beyond what the kids witness, which makes Grasso’s character feel superfluous.) It seems nitpicky, but I point it out because it’s one of the more glaring examples of how confusingly every character in the series behaves.

As I mentioned, the show takes place in 1995, and it does so for absolutely no other reason than to play radical music we all remember fondly. Virtually every character is perpetually listening to the radio, so you can bet your sweet Pog collection that Natalie Merchant, Ace of Base, and Boyz II Men punctuate almost every minute of the series. It’s like watching a bad teen drama while listening to the 90s channel on Spotify. It’s so cartoonishly egregious that the murderer actually instructs his victims to turn the radio on before he kills them. That’s right – even the sinister masked killer is like, “Hang on, I need to see if ‘Shy Guy’ comes on so I can remember what it was like to get turned down at the ring dance in 7th grade.”

When the Streetlights Come On is a combination of several successful, appealing formulas – a murder mystery surrounded by high school drama set against a backdrop of comforting nostalgia. But it doesn’t handle any of those elements particularly well, and instead chooses to simply go through the motions by recycling familiar tropes and bombarding us with 90s pop hits. It’s a shame, because the premise had the potential to become the first must-watch Quibi series for its target audience. Now if you’ll excuse me, I’m going to go listen to my Bush playlist on Apple Music.