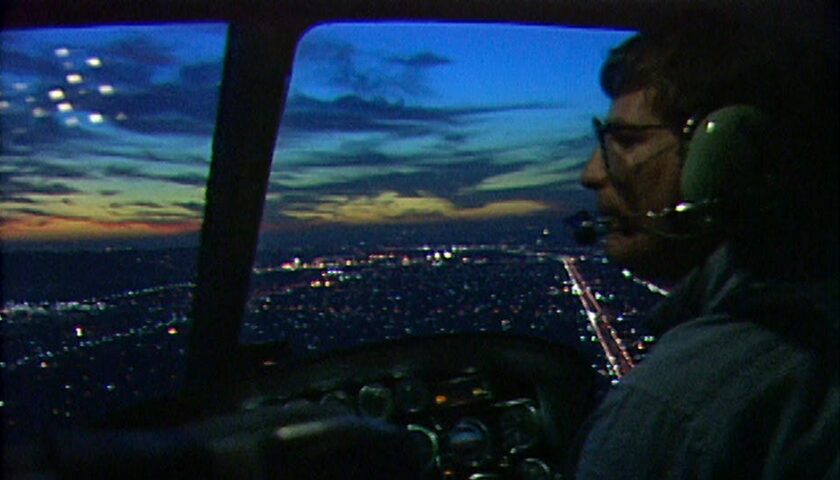 Zoey Tur’s reign as Los Angeles’ preeminent eye-in-the-sky helicopter reporter preceded my own arrival here, but her presence in the semi-recent run of documentaries tied to the O.J. Simpson trial and to the L.A. riots made it clear that in addition to being a reporter of almost unfathomable influence, Tur had a fascinating history of her own.

That history gets respectful-yet-clear-eyed treatment in Matt Yoka’s Whirlybird, part of the U.S. Documentary Competition field at the ongoing Sundance Film Festival. Whirlybird is a bittersweet portrait of the personal journey that led to Tur coming out as trans in 2013, paired with a chronicle of the explosion of breaking-news TV coverage in Los Angeles in the ’80s and ’90s, and balances those things without sugar-coating, in largely impressive fashion.

Even if you don’t know Zoey Tur, chances are good that you know Zoey Tur. She and then-wife Marika Gerrard were among the first reporters to recognize the potential of helicopters to get access to L.A.’s epic sprawl. Zoey and Marika were responsible for the footage of the first live coverage of an L.A. freeway pursuit. They were the first chopper to capture footage of the notorious White Bronco chase. The defining imagery of the L.A. riots, particularly the opening conflagrations at Florence and Normandie and the unforgettable capturing of the Reginald Denny beating? That came from Zoey and Marika. One could argue, in reasonably convincing fashion, that the grammar of Los Angeles news coverage, and with it the way the city is visualized both by residents and people outside of Los Angeles, is wrapped up in these two and their 20+-year relationship.

The doc opens with Marika taking the director to a storage locker filled with tapes of chopper footage, and that material is the film’s spine. Sometimes it’s used impersonally. There are multiple montages composed exclusively of swooping helicopter imagery of clotted freeways, frolicking coastal wildlife and ever-so-many kinetic shots of rooftops and neighborhoods. A few of those montages could probably use a little trimming before Whirlybird gets wider exposure, because the effect of intercutting so many jittery, constantly moving aerial scenes together can be a level of nausea that even Michael Bay would attempt to avoid.

Sometimes the footage is used for its behind-the-scenes news value. Seeing how Zoey and Marika learned and created their helicopter vernacular is completely engrossing on a technical level, and the conversations and negotiations around some of those seminal media moments are amply interesting even without the added tension that comes from taking place high up in the air, usually at a high volume so to be heard over the propeller’s thump.

Zoey and Marika, admitted adrenaline junkies, still get excited talking about their greatest experiences, and Yoka and editor Brian Palmer craft high drama and key character beats out of historical incidents you probably thought you knew in their entirety. For example, getting the context for Zoey’s obsession with the early reports on the Simpson case — she’d been flying over the Simpson house for days after the murders and, on foot, had even tried finding the murder weapon in nearby bushes — is informative as setup to one of the most famous live television events ever, and it’s illustrative on a personal level.

Perhaps more than anything, Whirlybird is a complicated depiction of a marriage, hardly the first chronicle of a family’s disintegration, but not one you’ve ever seen recounted in exactly this way. One thing viewers will surely notice immediately is that Marika, Zoey and their children Jamie and Katy (the latter an MSNBC reporter following in the family business) aren’t being interviewed together. It’s equally unavoidable to notice that Marika, Jamie and Katy all refer to Zoey as “Bob” or “Dad,” and that they use “he/him” pronouns. This is a family that still has issues and you can sense some, but definitely not all, of them being worked through on-camera as the film progresses.

This is appropriate because all of the highs and lows of Zoey and Marika’s marriage were caught on-camera. These are home movies on broadcast-quality tape, as Marika puts it. That means the arguments, and some are vicious, are captured at that same high standard (and usually at elevated altitudes). This is not a movie intended to make Zoey look good, and her regret and introspection are palpable, ultimately dominating the film in perhaps the same way that her obsessions came to dominate the family.

Yoka has a good sense of what his story is here. The doc restricts interview subjects to the core Tur family and to helicopter collaborator Larry Welk, presumably on the grounds that you don’t need other talking heads to say things like, “Man, that was a death-defying thing they did!” or “Boy, that ended up being the dominant image of the L.A. riots” or “What they did with that helicopter was really important.” You just understand. And when Zoey’s own footage features her getting into physical altercations with police officers and getting threatened by Sean Penn’s entourage, nobody from outside of the situation would be able to offer more trenchant commentary than Zoey’s observation: “Well, back before the sex change and estrogen, I was infused with this wonder hormone called testosterone.”

Whirlybird is informative and thrilling. It’s also profound and sad. And maybe it’s got threads of inspiration and uplift as well. That’s a wide range of responses, and it’s as much as you could have hoped for if you watched those Los Angeles-set documentaries and knew Zoey had a great story of her own.