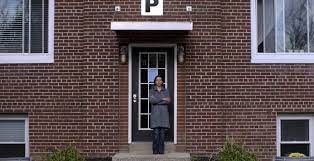 We hear a recording of a 1988 police interrogation in Sacramento. The woman being interviewed insists that the bodies that were buried in her yard were not murdered.

Worst Roommate Ever is a docuseries that takes a look at various horrific roommates, from killers and other violent criminals to squatters who find every excuse to stay and wreak havoc.

The first episode is about Dorothea Puente, a woman from Sacramento that comes off like a kindly grandmother, but turned out to be a serial killer. Through interviews, archival news footage, and animated reenactments, we hear about Puente’s childhood and her criminal exploits through the decades, starting with passing bad checks when she was 19.

The through-line of the story is how Judy, a social worker who worked for Volunteers of America, wanted to get an unhoused man named Bert Montoya a stable place to live. Despite some severe mental health issues, she felt Bert would be better off in a house environment, rather than in a shelter or even a halfway house. She felt that moving him in with Puente was the right move, as she ran a boarding house and had other boarders like Bert.

But when Amy hadn’t heard from Bert in a few weeks, she called Puente, who said that Bert had gone on a trip with her son. Because that made no sense, Amy eventually reported Bert as missing. Because of her past record, where she would knock out victims with paralyzing sleep medication, alerted the investigating officer to ask Puente to search her home where he found various pills. That led him to ask whether he could dig in her yard. When she gave permission, that’s when the grisly discoveries started. Overall, seven bodies were found, including that of Montoya.

Nothing we saw during the first episode of Worst Roommate Ever makes it particularly distinctive from other true-crime docuseries. Since three of the four stories are one-and-done deals (the fourth story spans two episodes), director Domini Hofmann doesn’t waste any time in giving lots of background.

There’s a quick introduction to Sacramento’s growth in the 1980s, which coincided with it’s growing difficulty managing its unhoused population, and there’s some biographical background about Puente. But for the most part, the content is about the case, which is a welcome relief from the more padded, single-topic true-crime docuseries we’ve seen lately.

Are we fans of the animated reenactments? Not really, but they’re relatively sedate, and we do give Hofmann and the producers credit for not doing more garish forms of reenactments to fill in some of the details.

We’re at a point with shows like these that having a straightforward storytelling method that moves along quickly feels like a refreshing approach. And the businesslike manner of Worst Roommate Ever is definitely a welcome sight.