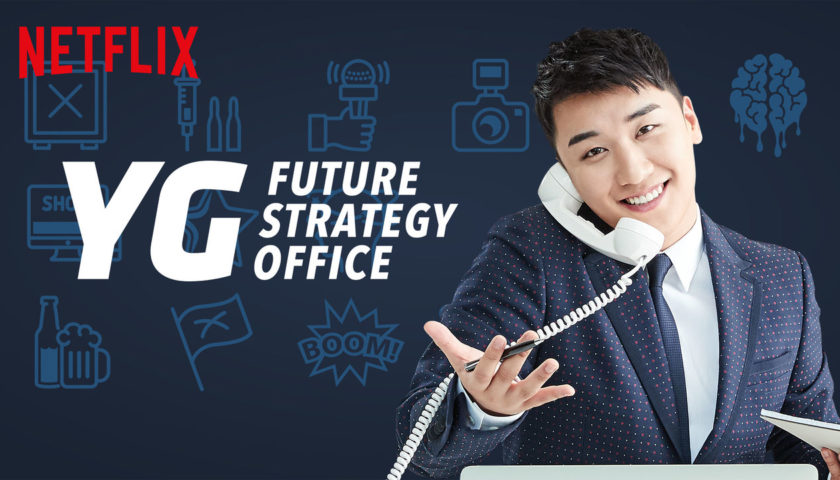 Review: ‘YG Future Strategy Office’ is an 8 episode Korean TV drama from 2018. It is a droll mockumentary about an incompetent group of Korean entertainers forced to come up with ideas to help better the future of the company they work for. It is currently airing on Netflix as of this review, and it’s pretty funny on its own, but is absolutely hilarious if you’re familiar with the individuals involved and the Korean entertainment in general.

First, I want to point out that this is not a Korean drama, nor is it a variety or talent show, and I don’t recall ever seeing anything like this come out of the Korean television industry. The closest show I can compare it to in tone is the British/American show ‘The Office’, as it is filmed in a similar way, with a lot of dry humor, awkward situations among a bunch of doofuses, people talking or looking into the camera, and no laugh track.

Here’s some background if you aren’t familiar with the basics: YG (YGE) is a real Korean entertainment company, formed by Yang Hyun-suk about 20 years ago. Yang Hyun-suk was originally a dancer during the birth of K-Pop, started YG afterwards, and has been very successful ever since. His company has mainly focused on producing idol groups and artists (such as BIGBANG, 2NE1, BLACKPINK, IKON, and others). He doesn’t perform anymore, but you’ll see him occasionally judging a talent show or in some cameos. He’s a busy man though, particularly since he’s been trying to expand his empire beyond the music industry into TV, movies, sports, etc. This TV show is one of his company’s new endeavors.

Story: YG has created a “future strategy office” (which is probably a real division within the real YG, but one that is most certainly not comprised of the moronic characters portrayed on this show). The staff of this mock office consists of a cast of several actors/comediennes/variety show regulars/K-Pop stars/etc. The newly assigned head consultant to this office is actual K-Pop star, Seung-ri (who is the youngest member of BIGBANG). In mockumentary style, he is anxious to make a good impression running this division and win renewed favor within the mock YG company. What he doesn’t realize though, is he just got sent to a dead end job as punishment/abandonment because he’s not holding up his idol image and his career is fizzling out.

What makes all this so amusing is that Seung-ri’s mock predicament is not all that different from his own reality. In the K-Pop world, there is an expected image standard that basically boils down to two rules: 1) Don’t embarrass yourself/company/family/country by getting caught in compromising positions or scandals, and, 2) Don’t get old or irrelevant. Alas, Sueng-ri has now violated both rules in real life. His Rule 1 violation was because he failed to avoid having some pics snapped of him with some lovers he tried to meet in private. Seung-ri violated Rule 2 simply because he’s now in his late 20’s, and that’s pushing the expiration date for being a K-Pop idol without transitioning into something else in your life/career. On top of that, Seung-ri has always been considered the least relevant member of BIGBANG, and the rest of them are older and either off getting married, completing compulsory military service, or getting in trouble with the law. Seung-ri has little to do by himself at the moment other than work on a potential solo album, and better prepare himself for the future.

So, this show is basically making fun of itself for making fun of Seung-ri’s situation in real life. You’d feel really bad for Seung-ri if this were all real (which it sort of is to some degree, and that’s what makes it so funny). Don’t feel too bad for him though, as he’ll be OK, and he’s certainly not the only one on this show that gets this treatment. In fact, all of the characters are written as if they don’t want to be involved in any of this; from the entire strategy team that hates their jobs, to the newer company idols who don’t want to associate with “sinking ships”, to the “old-timers still roaming the YG halls looking for work”, to the guest stars looking to overcome their own past scandals and get working again, on up to the CEO wondering why he is still employing some of these idiots.

It’s all one big joke and everyone is in on it. I’m surprised that everyone was willing to play along though, knowing that some of it must have “hit close to home” for several of them, but I applaud them all for participating. Aside from Seung-ri , there’s the regular strategy team that consists of other YG artists, a few extras and company staff, and a ton of guest stars that come and go; most everyone plays themselves (or rather, some mockumentary version of themselves), and most all of them did a fantastic job at both understanding and implementing the entire concept. Good job everyone!

Writing and Direction was pretty sharp; there’s a good bit of witty dialogue and biting commentary throughout the show, and everything is paced well and kept on track. There are plenty of skits, jokes, and suitably ridiculous circumstances as well, only a few of which miss the mark. Production values are workable, but limited (because the producers didn’t want to spend a lot of money on this experimental project, and it actually makes it more humorous if they don’t). Editors and post-production teams clean up the rest.

Summary: It takes less than 3 hours to watch the entire series, and it is very enjoyable (even if you know nothing about the Korean entertainment industry at all). And, if you are familiar with this industry, then it’s almost mandatory viewing. I loved it, and would like more please!