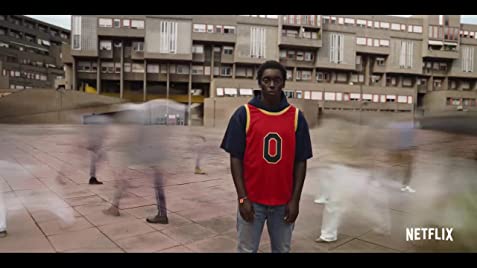 Omar (Giuseppe Dave Seke) lives in a neighborhood in Milan called Barrio; it has mostly an immigrant population, and as he says in voice over, it’s largely considered invisible by the city’s population. When he was young, he was given a bracelet by his mother when he was a kid, but his mother is no longer around; he misses her, but gets creeped out when he sees a painting of her in their apartment. A photo of her playing basketball wearing the number 0 is how he likes to remember her.

He lives with his father and sister Awa (Virginia Diop); their building is going to be redeveloped and they potentially will get kicked out. Omar is doing what he can, working jobs like delivering pizzas, though he wants to move to Belgium and pursue a career in art, drawing manga with Black characters like his hero Zero.

On one delivery, he gets locked in a penthouse apartment as the couple in it have a breakup argument. Sometime later, out comes Anna (Beatrice Grannò); the two of them connect by the indoor pool (!) about doing what they want to do and not what others want them to do. She wants to be an architect, for instance.

She also tells him about the “broken windows” theory of how neighborhoods go downhill; it sticks in his head when he sees yet another scooter on fire in the Barrio. As he tries to put it out, a guy named Sharif (Haroun Fall) starts chasing him with a gun, thinking he set the scooter on fire. Omar is trapped in an abandoned warehouse, then he grabs his mother’s bracelet and disappears.

Sharif comes and sees Omar at the pizzeria the next day, fascinated with Omar’s disappearing powers. He thinks they can do a lot of good in the Barrio with Omar’s abilities. After Sharif leaves, the pizzeria gets a call from Anna, who wants to invite Omar to dinner that night.

Omar goes to her apartment and finds that it’s her birthday party; but Anna finds her and they connect once again. But when he realizes he dropped his mother’s bracelet, he runs to where he lost it; but Sharif has gotten there first, and sees Omar’s disappearing powers firsthand.